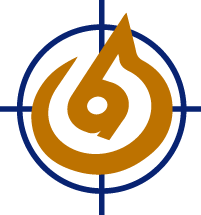 Airsoft An Emerging Practice And Training Aid – With The Right Targets

Airsoft is fun. I was introduced to airsoft almost two decades ago, in my brother-in-law’s back yard. I took on a few well-armed six-year-olds, and realized just how out of shape I was. I had the advantage, I thought, as I could aim well and had a sound strategy. They had stamina. They won.

Ever since, I’ve been a proponent of force-on-force training. But airsoft guns have increased in power, and I won’t play with my nephews any more. They can shoot, too, and it hurts. And I still can’t keep up with them, which is another topic.

That doesn’t mean I don’t see the training potential of airsoft. I’ve got some targets set up in my shop, and I can practice holster draws and shooting techniques without having to hit the range. Even that, though, feels a bit limited.

At a recent media event, I came across what I think is the logical next level. While it is rooted in airsoft, this new system has more to do with the targets than the projectile delivery platform. 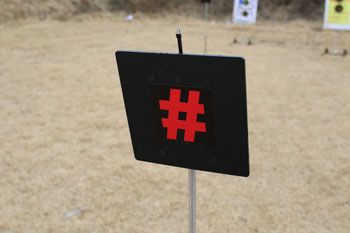 The company is called Hashtag Targets. They make an app based targeting program that pairs reactive targets with a variable training program.

Each target functions in one of two ways. The program can light up a target for you to shoot, or the target will light up when you shoot it.

The lights come from LEDs that are housed behind a Lexan plate. The Lexan plates are durable enough to take hits from airsoft and BBs. Behind, sensors register the hits.

For those shooting with pellets, there are aluminum plates. With that option, a thin light stick plugs into the sensor. And sticks up over the top of the plate.

The angle on the plate, like many steel targets, sends the rounds down.

The plates are 8”x8”. Right now, the targets have the # symbol in red on black. They will come with other images, like the squirrel, or coyote head.

The plate responds to a certain frequency. Wind, even wrapping it with your knuckle, won’t trip the light. Wrapping on it with a metal rod will. BBs and airsoft pellets light it up, no problem.

We were at a range in Tulsa, Oklahoma. It was cold and overcast, and the lights were clearly visible. They would be harder to see in bright sunlight. There is also an audible pop, of the pellet or BB on the Lexan. So shots, even on the brightest of days, could be heard.

The app comes with 3 games installed. One is a basic run-and-gun that will help work on gun skills and the stamina you might be lacking. The second is a quick draw option that measures split times.

The last, and perhaps the most fun, is a fast paced setting that lights up the targets in what was described to me as an airsoft version of “whack-a-mole.”

George Ford, CEO GnatWarfare, is the man at the helm of Hashtag Targets. He was out on the range with me that morning. GnatWarfare is an established player in the training industry. Most of their existing line is built for much more robust ammunition. Their remotes and drones are built for shotguns and centerfire rifles.

The current lineup for Hashtag Targets is meant for pellets and BBs, but there’s a possibility that the technology could be used with higher impact projectiles, too.

It is the air guns, though, that show the most promise for training, as the use doesn’t require the same range space that would be needed for rimfire or larger rounds. 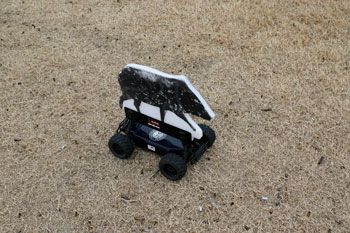 Take this example. The Tactical Pig, aka “Kevin Bacon,” is ideal for airsoft. It is a pig target mounted on an RC car chassis. It isn’t reactive, as such. It doesn’t light up when you hit it. But you can hear the shots hit.

This is so much fun with a full-auto rifle. When the BB’s knock off the pig’s paint, simply spray paint and go again.

While Kevin Bacon is fun, there’s a serious side to this, too. The targets have practical applications for law enforcement and agency use. The airsoft allows for safe shoot-house simulations. The lights on the targets can vary, so good guys are one color and bad guys are another. The remote controls allow for those colors to change, on the fly, to simulate good guys that go bad, or bad guys that surrender.

The potential for this is easy to see. The app will allow you to program many different scenarios. If you are kicking back and plinking in the backyard, chase the lights around on the plates. If you are looking for a way to train for competition that is easy on the wallet, this is it.

One of the more promising bits of gossip I picked up on my range trip was that the targets will be paired with guns from UMAREX and Elite Force Airsoft in package deals. But any air-powered guns will work.

Umarex Airguns is a logical partner for this pairing, though, for another reason. Backyard plinking and competitive shooting are two obvious ways that #Targets will be marketed. The other, and the one I’m more interested in, is the real world potential. UMAREX makes more licensed copies of centerfire handguns than any airgun maker. Just check out their Elite Force Airsoft line of rifles and pistols.

I often carry a GLOCK 19. UMAREX now makes GLOCK 17s and 19s that fire BBs. I can’t wait to set up the #Targets system and run it with an actual GLOCK BB gun.

That’s what I’ll use it for. I want to train as often as I can, and with as much realistic feedback as I can muster. With an Umarex GLOCK 19 and the Hashtag Target system, I can set up in my shop, pop on the safety glasses and get to work.

Get The Solutions You Need

We Always Hit The Target